Home Regions Asia The “DISTRICT OF DREAMS”: living in the WOODS with underground transportation and... 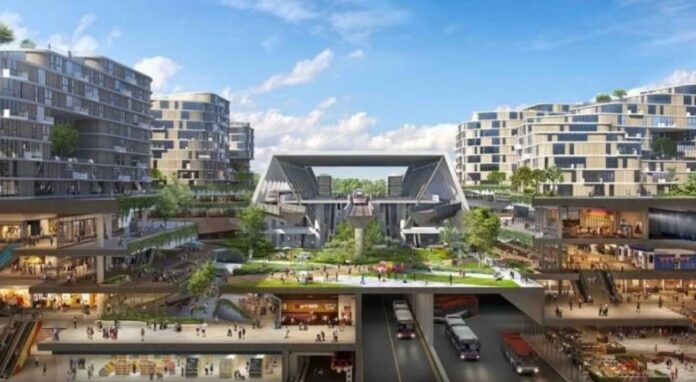 This city state has always been a step ahead in terms of green evolution, but in recent years the city has been striving to transform itself into a true garden city. Let’s find out together what will happen with the construction of the new Tengah district, already defined as the “dream district”.

The “DISTRICT OF DREAMS”: living in the WOODS with underground transportation and urban farms

Tengah will be the first neighborhood to be transformed with the aim of reducing its carbon footprint and becoming carbon neutral by 2050. It will host approximately 42,000 new homes in 5 residential districts designed to allow people to live in the open and minimize the environmental impact.

# Forest Hill: the urban hill without cars or above-ground transportation

The first district of the neighborhood is Forest Hill and it was designed to let people live in the midst of nature: modern architecture is combined with parks and trees, creating a magical and relaxing place where traffic and transportion are confined underground.

# Plantation District: the district that brings food from the garden to the restaurant table

This district was designed with the idea of ​​creating a place devoted to community gardens, farmers’ markets and restaurants. This way, the inhabitants are spectators (or active players) of the whole production process through to consumption at the table.

The Garden District was designed taking inspiration from Central Park: it includes outdoor games and several farms that can be visited by citizens.

# Park District: the center of Tengah, completely pedestrianized and surrounded by woods Limited traffic zone in the city center? No! Park District will be the first city center to be completely walkable, car-free and surrounded by woods.

# Singapore: an inspiration for other megacities?

There are many countries that want to reach the goal of zero carbon emissions by 2050, so Singapore is likely to be just the groundbreaker in the field of designing smart cities around the world. Some of these ideas could be a stimulus for more liveable megacities, projected into a more human-sized future.