Home Experiences For PLANT enthusiasts: the 7 most BEAUTIFUL GREENHOUSES in the world 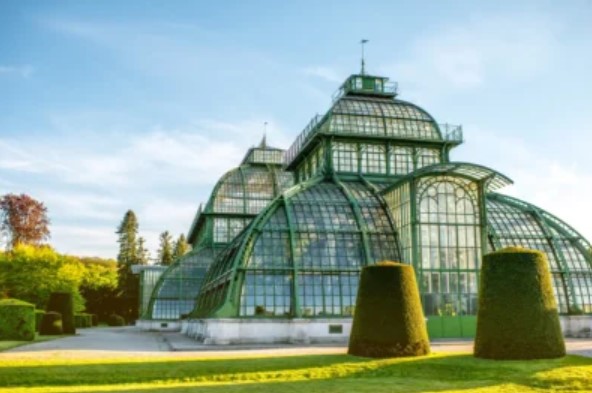 Let’s take a quick tour around the world to discover the selection of the most beautiful greenhouses in existence, which inside them contain real huge ecosystems, able to fascinate even those who have a thumb in all colors except green.

For PLANT enthusiasts: the 7 most BEAUTIFUL GREENHOUSES in the world

In an Italian Renaissance-style building, this beautiful New York City greenhouse is located in the borough of the Bronx. Inside the Enid A. Haupt Conservatory, an ideal habitat has been created for a tropical jungle, full of cacti, aquatic plants, carnivorous plants and palm trees.

#The PALMENHAUS SCHÖNBRUNN, the Shönbrunn Palace Park in Vienna, Austria

The Palmenhaus Schönbrunn is located in the famous park of Schönbrunn Palace in Vienna. With an area of 2500 square meters, it is composed of three distinct parts: one central and two lateral, respectively rectangular and square. In the central section a Mediterranean climate has been recreated, one of the side sections is the tropical zone, while the other is called the “cold house”.

It is part of the complex of gardens and greenhouses of the Kew Royal Botanic Gardens and is the greenhouse of large plants: it hosts, among the vast selection, the Chilean wine palm, the pincushion and the kakabeak. It has an area of 5700 square meters and this makes it one of the largest greenhouses in Europe.

The structure, modeled on London’s Crystal Palace, is in Art Noveau style and is located in the city of Curitiba in southern Brazil. The greenhouse, which houses the native Brazilian flora, is located in a park inspired by the style of French gardens, then enriched by water features, ponds, statues and dominated by symmetry.

The royal greenhouses of Laeken are a complex of monumental greenhouses belonging to the royal family and located in the park of the castle of Laeken. Open to the public only for a limited number of days a year, they host tropical, subtropical and cold greenhouses, thus including a very wide range of flora specimens.

#KIBBLE PALACE inside the Glasgow Botanic Gardens in Glasgow, Scotland

Initially conceived as a site for exhibitions and concerts, it became a greenhouse starting at the end of the 19th century. It offers a remarkable collection of orchids, ferns and carnivorous plants, as well as a collection of beautiful statues, placed between one plant and another.

With a Gothic and Italian architectural style, this greenhouse is located in Golden Gate Park in the city of San Francisco, on the west coast of the United States. The peculiarity of this greenhouse is that, unlike the usual glass and iron skeletons, the Conservatory of Flowers has a wood and glass structure. It offers examples of lowland tropical plants, deep-sea tropical plants, aquatic plants and potted plants.