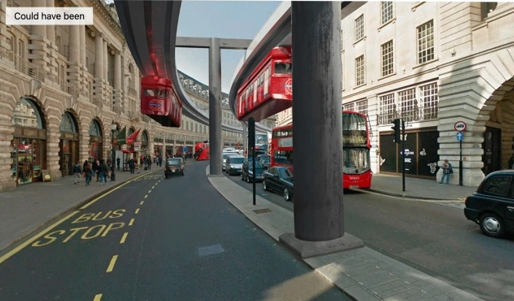 City airports, huge crystal buildings and even a multimedia totem. These are just a few of the projects that have never been passed from the abstract thought, to the reality. A well-known real estate firm is giving us some fascinating renderings today

NYLon concept was born by a chance, during a transatlantic flight from New York to London. A passenger looked at his ticket and made this cute joke about it, simulating the famous synthetic fabric.
New York and London have in common much more than their language of origin: they are, for example, destinations of very busy international routes. The collective imagination has always been triggered from these large cities, dreaming of how they could have been even more impressive.
Architects have also drawn attention to them, dreaming up huge innovations that have never come true. Today, London-based real estate specialists Barrat Home examined some of these projects and their locations in these cities. Let’s look at some of them.

One of the worst problems of London has been, until recently, the excessive smog due to urban traffic. Londoners have even preferred private cars to public transportation, which, being half empty, have also been the subject of critics and abolition proposals.
To decrease congestion on the streets was introduced a suspended monorail, to be carried along the main streets.
London’s mass transit projects then focused exclusively on the subway, so the monorail was abandoned. The rendering relates to Regent Street

City airport is practically the forbidden dream of every metropolitan resident. In London, a mega-project was proposed in 1934, with an airstrip good for takeoff and landing of single-helix aircraft, a lower floor to host aircraft and store fuel, and a check in on the other side of the Thames. The structure would have been right near the House of Parliament, raised so high as to allow ships to pass on the river.
Today we imagine why this mega project never came true.

Trafalgar is the place where London’s authorities have decided to concentrate the memories of the long war against France. The square takes its name from the battlefield where the war was won, with the monument dedicated to Admiral Nelson, who lost his life there. Today’s vision has, so by speak, won out over another suggestive hypothesis, the one creating an enormous 22 steps pyramid, one step for each year of the war, so high that it would have get higher than St. Paul’s Cathedral.

The Crystal skyscraper, seen today, no longer even looks like a mega project, but if we put it in context at the time it was proposed, we realize its true sizes.
It was to have risen in South London, in the area that is still called Crystal Palace and that owes its name to a structure that was destroyed by fire in 1936.

The Crystal Palace was the site of the 1851 Exposition, beating out the Charles Burton’s design, who had dreamed of a 1,000-foot-tall building of steel and glass that would be as tall as “The Shard” is today.
However, Burton’s calculations were unreliable, so it was preferred to lay the crystal palace horizontally: the vertical one of this mega project would, most likely, imploded under its own weight, collapsing miserably and fatally.

Obviously, New York City has also dreamed of its own city airport, to be built in Manhattan. The idea came from William Zeckendorf, owner of the Crysler Building and the Astor Hotel.
Hailed by LIFE Magazine as a futuristic project in 1946, it was a pure mega structure: extending over 144 blocks, from 24th to 71st Streets, from 9th Avenue to the Hudson, the airport would also have docks and piers for docking ships.
Maybe excessive cost was the discriminating factor: $3 billion post-war.

Roosevelt Island is the name of a strip of land overlooking the East River, once a place dedicated to housing convicts of forced labor, hospitals, and psychiatric facilities.
In attempt to revitalize and redevelop this small island, Thomas J. George proposed a huge project for a civic center, capable of serving all of New York City.
It would be dominated by a Greek and Renaissance style building, over 600 feet tall and extending for 7 blocks.
Had it been built it would certainly be one of NYC’s must destinations and, perhaps, Roosevelt Island would have surrendered its name as Municipal Island.

In 1845, New York City was probably the only city in the United States not to have dedicated monuments to any of the leading figures in its history.
The criticism appeared on the Broadway Journal columns and then the city immediately moved to erect a giant monument to George Washington, planned in Union Square and which would be 425 feet tall, twice as high as the tallest skyscrapers of the time.
The monument would have been home to a library with over 400,000 volumes. A true mega-project, worthy of the iconic founding father, who would appear on the second floor of the library, holding a copy of the Constitution.
Everything was ready, the funds deliberated by the city. Curiously, it was the Broadway Journal’s very fierce rejection that stopped it from being built.

Times Square’s past has not always been brilliant. The square that is now visited by tens of millions of tourists every year, brightly lit by mega screens, was once a dark and dangerous place.
A contest, launched by the Municipal Art Society and the National Endowment for the Arts, has collected the most futuristic ideas to redevelop the area. Among these, a real totem pole proposed by George Ranalli certainly stands out.
With its head in the shape of a stepped pyramid and a sort of observatory made with a giant sphere towards the lower floors, the totem was to have towered at 1 Times Square, the mythical One or simply Times Tower. It was not necessary

Whether the missed realizations are mega loses opportunities, or mega fortunes, we leave to personal judgment. What we like about these stories is seeing how great cities always need to dream to improve.
Do you think they always succeed?

Continue reading: The NEW SKYSCRAPER in the BILLIONAIRE’S ROW in New York