Home Cities 10 STRANGEST THINGS we have in Italy 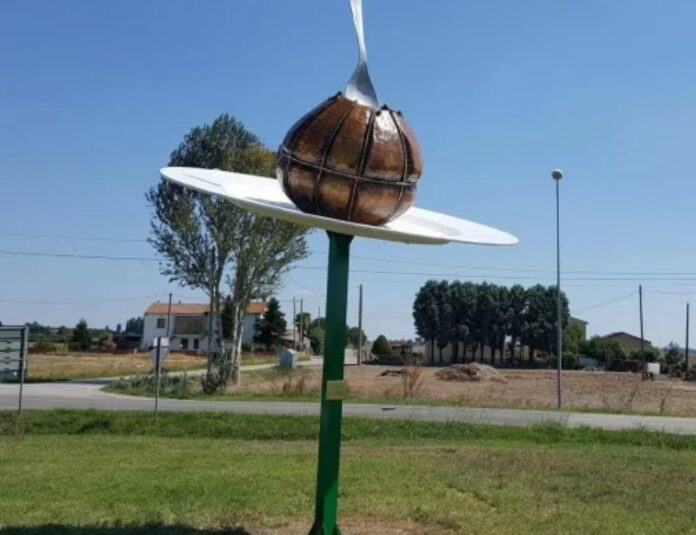 Sistine Chapel is certainly gorgeous, Duomo Cathedral in Milan is marvelous, St. Mark’s Square is amazing, but tourists are also attracted by curiosities, weird places and unusual monuments, of which Italy is pretty rich. Places and monuments such as…

10 STRANGEST THINGS we have in Italy

What is a giant toilet brush doing in this town on Lake Orta? The Internet hasn’t solved this mystery yet, but in the meantime it’s still there.

For those who do not know it, salama da sugo is a processed meat typical of Ferrara, used to flavor the sugo (tomato sauce for serve pasta) to which has even been dedicated a monument: unusual, isn’t it?

#3 The Titts Fountain in Treviso

While walking in the beautiful Treviso you could see this curious statue, which during the times of the Republic of Venice used to dispense white and red wine, during very special celebrations.

#4 The sword in the rock of Chiusdino

At the Abbey of San Galgano in Chiusdino, in the surroundings of Siena, there is a sword that, according to the legend, would have been stuck in the rock directly by the saint to whom this place of devotion is dedicated.

#5 The finger of Milan

#6 The fossil forest of Dunarobba, at Avigliano Umbro

In the territory near Terni it is possible to explore this curious forest of mummified trees, dating back to three million years ago, belonging to an extinct species of sequoias.

In the Bolzano area there is a village with an artificial lake, created in 1950 after having ” displaced” the inhabited center that once stood there. Of this village remains only the ancient bell tower, dating back to the fourteenth century, which still emerges from the water. It can be reached on foot in winter, when the water is frozen.

#8 The Truck Driver Monument in Bologna

Someone had the idea to dedicate a ten-meter-tall sculpture to all truck drivers, covered in aluminum foil, a human figure carrying a truck on its shoulders.

#9 The Monsters’ Garden of Bomarzo

Just near Rome, in the province of Viterbo, appears an amazing garden also called “Sacred Wood”, which was commissioned in the 16th century and decorated with statues of mythological figures, fantastic animals and monsters.

Considered by many to be the ugliest monument in Italy, the so-called “suicidal tunas” should decorate one of Genova squares, but actually are not appreciated by anyone