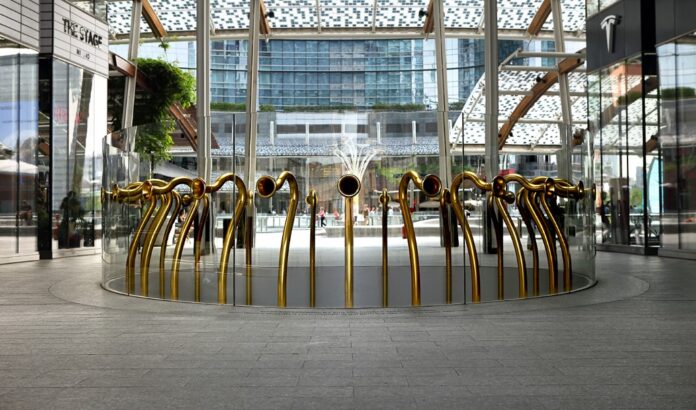 Piazza Gae Aulenti was designed by the Argentine architect Cesar Pelli as the new gateway to Milan. Inaugurated on 8 December 2012, it received the Landscape Institute Award 2016 for the design for a medium-scale development category. The square is made up of many elements that make it unique. Let’s go and discover one of the most particular.

# The neighborhood yesterday and today

The area now occupied by the Porta Nuova business center owes its past development to the railway history of Milan. In fact, in the area between Piazza Repubblica and the current Porta Garibaldi Station, between the 1800s and 1900s there were several railway stations, replaced from time to time following the continuous increase in traffic that involved Milan.

Since 1963 the area now occupied by the Porta Nuova business center was used by traveling circuses and by the rides of the Varesine Luna Park that accompanied the lives of many Milanese families until 1998.
The area remained in a state of neglect and decay for some time, until in 2004 the Municipal Administration approved a redevelopment plan called the Porta Nuova Project. The entire complex is the expression of a new vision of the city of Milan focused on concepts of urban, infrastructural and environmental sustainability with large pedestrian spaces to live. In particular, Piazza Gae Aulenti embodies this spirit by hosting numerous highly characteristic and unique elements.
Inside the square you can in fact find fountains, water features, benches, bars, bookstores, connected to the park called “Library of the Trees” allowing various activities including shopping and relax, from walks to bike rides, from coffee to appetizer.

# The trumpets of Piazza Gae Aulenti

Both for tourists who visit the square for the first time, and for the Milanese who live it every day, it becomes impossible to resist the call of one of the most curious structures in the square: the trumpets.

It is an installation made up of 23 chromed brass tubes inserted inside an empty well that allows air to circulate between the parking lot and the open space of the square through the 4 levels that separate the parking lots from the open space of the square. square. The ends of the tubes have the shape of an elephant’s trunk and, by placing the ear on these openings, it is possible to hear the sounds and words coming from the other end of the same without however knowing who or what is there at that moment.

# A work of art that comes to life from visitors

The tubes are a real work of art, called “Egg” and created by Alberto Garutti, artist and university professor who bases his work on the concept that a work can live and function in the city only if it is “felt”, lived and cultivated by its inhabitants.

It is precisely the visitors who with their ears and voices mixed with the noises of the city go to give life to what becomes an ever-different musical instrument, keeping unchanged over time the curiosity to put their ears on it while waiting to understand the origin of the sound. .

At the same time, this work has the merit of giving life to a place that would have been empty, providing a decorative and interactive function well summarized by the sentence present at the foot of the installation: “this work is dedicated to those who, passing through here, will think about voices and sounds of the city “.