Home Projects Buildings Would you live in an underground PENTHOUSE? The amazing UPSIDE DOWN... 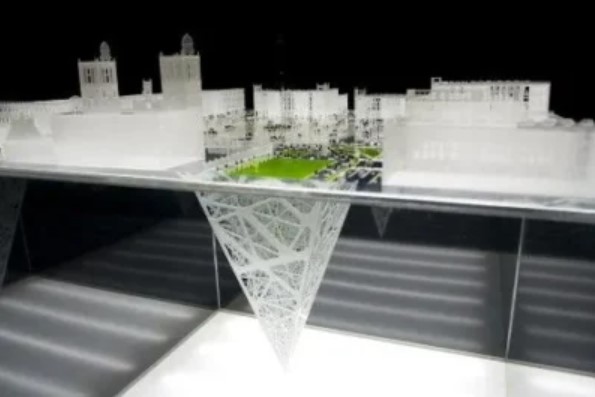 While main capital cities are in competition to build up the highest skyscraper, there’s someone else thinking opposite: this is probably the most strange and surprising project in architecture’s world.

Would you live in an underground PENTHOUSE? The amazing UPSIDE DOWN BUILDING

The plan: a building in the Mexico City subsoil

Inverting building proposals and conquer the inside part of our planet rather than the sky. It’s the unbelievable philosophy that guided a team of Mexican architects, who imagined to build the most strange construction in Mexico City. Instead of changing the aspect of a city mainly dominated by flat houses and small apartments with an intrusive skyscraper, they thought to create a project to be realised under the floor, at a 1000 feet depth.

First drafts of upside down building: a giant Mexican Museum. Then, the steps

Leaving from ground zero, first ten floors will be taken by a great museum representing all Mexican states starting from precolombian populations, while walking down will be possible join malls and shops built up around special gardens. The building will have an upside down pyramid shape, empty in its core but linked on sides by bridges, with a shining glass floor that will spread lights everywhere while crossed.

First Earthscraper in the world

BNKR Arquitecture also projected inside El Zocalo (that will be its name) a 787 feet side square surrounded by a Cathedral and a Government Headquarter. All in perfect environmental-friendly policy, a must for new buildings. This earthscraper will also join natural light coming from a transparent floor at the entry and brand new ventilation systems, to make sure air down there will always be safe and healthy to breathe. Then, as a cherry on top, an underground train station. This seems to be an insane project, but the real question is: will it ever have birth? And if so, would you live down there?