Home Regions Africa The longest walk in the world 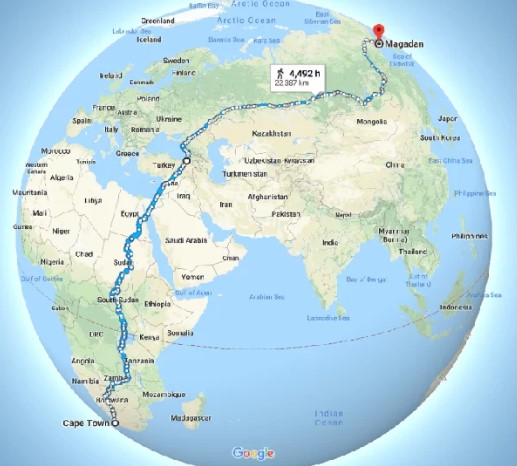 Twenty-two thousand, three hundred, eighty-seven kilometers in total. That’s how it takes to do it all. Indeed, a bit of a distance. Let’s see from where to where this endless walk led. And how long it would take to accomplish this mission.

The longest walk in the world

# From Cape Town to Magadan: almost two years on the road

Considering an average pace of about 5 kilometers per hour, to be done for 8 hours a day,  this journey would take 562 consecutive days. From Cape Town to Magadan, a city located on the Gulf of Nagaev. If you still want to go further than that, you can try to reach Lorino, a thermal rural town located on the boundary of the Chukchi Sea and the Bering Sea.

When to embark on such a journey? Consider that in summer Russian city of Magadan enjoys mild temperatures which can even exceed 12 degrees as average, whereas in winter it never sees anything but freezing. Another point to look at is that in most parts of the route inhabited centers are at least a few hundred kilometers away from each other, which is way too much for being done on foot.

# No one ever done it

If you want to remain on the original route, you will for sure get some adventure. But, the effort is rather demanding. At the moment there is no news of people who have traveled the entire distance. To those who may want to try it, well, they would have to deal with prohibitive climatic conditions. And let’s not forget some possible dangers: wild animals, sometimes hostile populations, conflicts between countries or factions. In short, an adventure to the limit that obviously discourages anyone.

The only solution to make it possible is to study the route in detail, lengthening it in order to avoid the many off-limits areas. It will take several years in total but the emotions are guaranteed. All that remains is to program well each of the stops, considering the time you will need to cross the borders. And, in the meantime, preparing yourself adequately with a great physical training and a lot of money aside.

And if ever the steps to take were not enough, the original path includes about 118,000 meters in altitude, such as climbing and descending 13 times from Everest. Just to be informed.

Ready? Let’s go and wander off through Africa, Europe and Asia.