Home Regions Europe The most BEAUTIFUL BIKE ROUTE in Europe 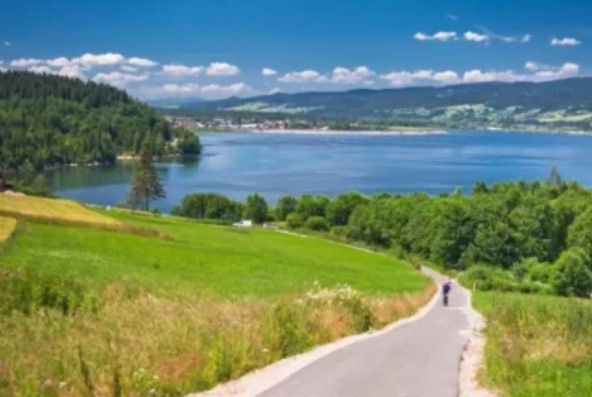 The challenge of the most beautiful cycle path in the world has been open for a few years now. With the aim of making mobility greener and discouraging the use of polluting private vehicles, cycling routes are being created around the globe to connect as many places as possible. And to entice you to use bikes and make the tracks even more attractive, these are also built in noteworthy landscape contexts, thus giving rise to new tourist itineraries.

The most BEAUTIFUL BIKE ROUTE in Europe

So what is the most beautiful cycle path ever? This is certainly one of the candidates, at least for Europe.

What is called “the most beautiful cycle path in Europe” is called Green Velo and is located in Poland. It winds through the unspoiled nature of the eastern side of the country for 200km, also meeting some historic cities to visit. Among villages, forests, rivers and lakes with crystal clear water, the landscapes it offers make it one of the most beautiful cycle paths in Europe. Yet its success conquered it in a short time: the Green Velo was in fact inaugurated in 2015, with the aim of making the beauties of Poland known and creating an alternative tourist itinerary. The paths of the Green Velo are partly asphalted and partly not. Moreover, being very long, it is rarely covered in its entirety, you have to choose which stages to do. Here are the most beautiful stages of the Polish cycle path.

# The most beautiful stages

The Green Velo starts in the Land of a Thousand Lakes, or rather from the Masuria region, where you can admire many lakes with crystal clear water while pedaling. The track then passes through 5 national parks: the first one you meet is that of Bialowieza, a reserve famous for protecting the animal species of European bison, among others there is the Roztocze National Park with its spectacular scenographies of water. Here are rushing rivers and waterfalls that create must-see views.

But Green Velo wants to make all of Poland known, which is why along the 200km there are also inhabited centers such as Lublin, where art and history are the masters, and Zamosc, a Renaissance town that is a UNESCO World Heritage Site. Finally, along the way, an unmissable stop is the one at Krzyztopor Castle, where, in addition to the remains of the fortress, you can also see the oldest oak in Poland.