Home Cities The “TRAIN of DEATH” that crosses DREAM VIEWS 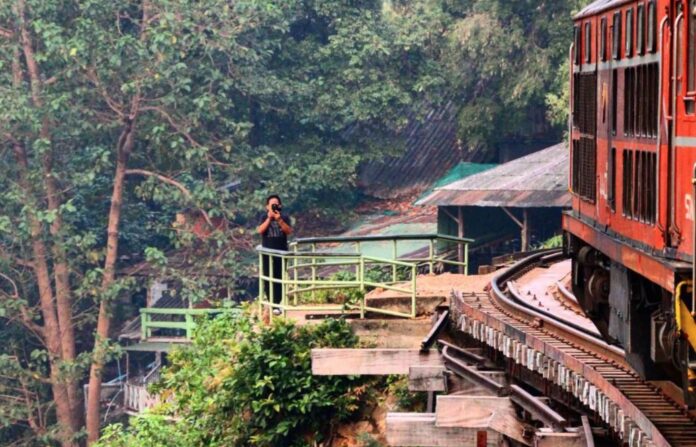 These 415 km of railway track not only hide spectacular views, but also a terrifying past.

The “TRAIN of DEATH” that crosses DREAM VIEWS

# It looks like a simple railway, but its tracks hide a tragedy

Railway of Burma, Burma Railway or Siam-Burma Railway. There are many names associated with this railway, but one most of all is imprinted in people’s minds: the “train of death”.

To retrace the steps of these wagons, you have to go back almost 80 years. It was the early 40s of the last century when the Japanese Empire began the ambitious project. Today this railway no longer exists, or at least it is very different from that of the past, but its tragic history can still be perceived between its tracks.

The Railway was built with one main purpose: to facilitate the supply of troops and weapons during the Second World War. Originally, the route was about 420 km long and connected Ban Pong (Thailand) with Thanbyuzayat (Burma) and on both fronts it crossed other pre-existing railways that made it possible to reach Bangkok on one side and Rangoon on the other.

A complex plan that required a conspicuous manpower to be completed. As planned, many men were employed in the construction: according to the Australian government, about 330 thousand people found work in this project, including 61 thousand allied prisoners of war.

Yet despite the large workforce, the project was running slowly. The workers were not enough to quickly complete the work and a solution was soon found.

# Train of death even before starting its run: almost 100 thousand people lost their lives

The government decided to support the military over 250,000 Asian civilians, forced into forced labor. The Japanese guarding the construction site treated the workers terribly, providing them with completely inadequate food and medical assistance and forcing them to grueling shifts.

Death estimates are terrifying: around 90,000 civilians and more than 16,000 prisoners of war lost their lives during the works, many of whom died from cholera, dysentery, malaria or simply starvation.

This is how the Burma Railway soon became the death train. Although after the end of the war most of the line fell into disuse, some of its tracks have reached the present day and for the more daring a section can still be visited.

# Also starring in a film, the train crosses surreal landscapes

To pay homage to all the workers who lost their lives, a long stretch was restored which today has become a destination for many curious tourists, not only for the tormented history, but also for being able to see with their own eyes the spectacular landscapes that run along the tracks.

Now the terminus at Nam Tok, but there are also other sections after this station that have been put back in order. The route follows the River Kwai and one of its most striking attractions is the bridge that crosses the watercourse. Made famous by the film of the same name directed by David Lean, which tells the story of these territories, the Bridge over the River Kwai was heavily damaged by bombing during the war and closed definitively in 2014, replaced by a new one.

Getting on the train is an experience to try. Today we travel only in third class, passing through the greenery of that Thailand far from the usual tourist routes. Streams, waterfalls and cliffs on the sides, the path of the train of death offers an almost paranormal scenario and the serious “one name, a guarantee” could not be missing from the Hell Pass.

# A short pit stop in hell

On the other hand, for a death train he could not skip the stage to the underworld. This railway section climbs up the Tenasserim Mountains and was so called because it is one of the points where more men died during its construction.

Unfortunately, the current railway does not reach the fascinating Hell Pass, however this important historical heritage has regained its value thanks to the construction of the Hellfire Pass Memorial Museum. Today the railway section has in fact become a memorial site, connected by a pedestrian path to a museum that exhibits objects, photos and films of the time, and which trace the tragic history of the Death Railway.

What can I say, given the breathtaking landscapes (literally) taking a ride on this train is definitely worth it, but maybe we wait for them to add the “paradise” destination.