Home Cities How do you behave in Milan? The 10 STRANGER RULES in force... 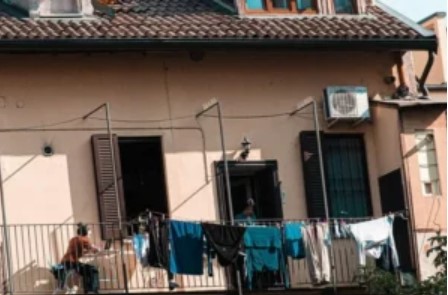 There are two ways to imagine Milan in 1920: having a good preparation in contemporary history behind you and then just close your eyes and unleash your imagination, or read the regulations. In Milan, the Urban Police Regulations of July 1920 are still in force with various additions and amendments, which mostly concern the tightening of restrictions and the conversion of penalties into Euro. In the streams of these beautiful intentions, what will be the strangest regulations?

How do you behave in Milan? The 10 STRANGER RULES in force in the city

#1 Forbidden to carry a dead person

Hands up if you’ve never seen the 1989 movie Weekend at Bernie’s. Then we also think about how many might have found themselves in the situation that inspired that comedy, or who hasn’t thought about keeping a corpse with them for some reason. It is difficult to believe that there is some place on Earth where it is possible to do all this, but know that in Milan it cannot be done.
It is forbidden to drive in a car with a body on board. If you get caught with “a body without health suitability” a fine of 3,098 euros is triggered.

#2 Signs and shop windows: no to the foreigner

In the most polyglot and international city of Italy, there is a rule that regulates the “Inscriptions on signs, shop windows, etc. which must be in the correct Italian language. However, the translation in a foreign language can be added as long as it is in less conspicuous characters “.
The imagination immediately runs to the initiative called YesMilano, the schedule of the famous Milanese weeks.
As well as all the lounges, wine bars, all the experiences that can be done in Milan.

#3 Pets, business and farm animals allowed on the subway, but not during peak times Milan is certainly a city inhabited by big-hearted citizens, willing to adopt furry 4-legged friends for life who become real family members, as such they are protected by the regulation. Dogs, for example ‘cannot be used for towing purposes. Unless you have a special authorization from the Municipal Authority “. The urban police regulations prohibit “grazing or grazing animals” in public places, but above all it prohibits taming them.
Until the introduction of new ATM rules and tariffs, a rule determined the times and ways in which our animal friends could access the subway, containment and time slots: from start until 7:30, from 9.30 to 17.30 and from 20.30 at the end of the service.

Who knows if Adriano Celentano, one of the most italian singer, in his film Bisbetico Domato had in mind to violate a city regulation in the scene of the pressing of the grapes shot at none other than Villa Necchi, in the heart of Milan, where he decides to replace an accountant with a calculator, instead of 20 grape crushers with a squeezer diesel.
The fact is that art. 80 of the urban police regulation expressly prohibits crushing grapes in public streets. We have not been able to trace the reasons but this rule is in force in many Italian cities.

In the country where the age of 66 is a double bar in which a human being can still work but not go to the supermarket to shop as that number is synonymous with fragility, the city of Milan puts a firm point in safeguarding of citizens: «Transportation of objects by hand. – It is forbidden to have objects carried by hand which, in terms of volume or weight, are disproportionate to the age or strength of those who have to carry them “.
For city streets, strict article 23 applies to: “Rolling or dragging of objects. – It is forbidden to roll or drag barrels, rims, wheels and heavy objects in public spaces“. There are rules for all types of transport.

In post-pandemic Milan with the increase in e-commerce that delivers everything at home, the “parking of vehicles in public spaces for loading and unloading is subject to the condition that the goods are loaded or unloaded without placing them on public land. When it is necessary to place the goods on the ground and such operations cannot be done in the courtyards, permission from the Municipal Authority is required to unload onto the public road ”

#6 Forbidden to lie down in public

A delightful chapter: the provisions to the rescue of decency. There are a number of regulations in the city that define places of decency and sanction offenders.
For example, “In any public place it is forbidden to satisfy natural occurrences outside the appropriate artifacts” (to pee in the street) and “to leave the dressing rooms, latrines and urinals without having completely put your clothes back in order“. Of course, it is forbidden to show nudity. The absolute ban on “lying down in public view” is much less intuitive.

You can only swim in places designated for water sports, only wearing appropriate clothing.
Speaking of clothing: have you ever wondered why in Milan there aren’t those beautiful balconies with clothes hanging out in the sun to dry? It is strictly forbidden by an article that regulates the display of clothes or similar items: “In the urban area, clothes, linen, bedding and the like cannot be exposed to the public’s view from windows, balconies and terraces”

#7 Baseball on the street? No!

In the art. 21 of the Milan urban police regulation, the one that regulates outdoor “games”, it is amusing to read that in the streets of Milan it is “forbidden to throw any object in public transit or even private places common to several families. It is also forbidden, outside the places intended for this purpose, any game, ball, petanque, diabolo (a game in which a two-headed top is thrown up and caught with a string stretched between two sticks), spinning top, etc. for which it is necessary to run or throw objects”.

#8 Forbidden to pour water on the snow

Snow is a probable atmospheric event in the Milanese winter. In case of snow, the owners of the buildings must ensure «the resistance of the roofs and cannot, without permission, unload the snow on public land. [the snow] must be transported to the places established by the Municipal Authority.
In places of public transit it is forbidden to make slips on the ice», whatever the legislator meant when he thought of this rule.
It is also forbidden to water public land in freezing weather.

#9 You can’t work stone on the street

Except for exemptions and concessions from the Municipal Authority, in the city of design, of Liberty, of the tramway cobbles, the cobblestones of Brera or the Candoglia marble of the Duomo, even the processing of stone and metals has its own rules, granite and iron.
“In places of public transit it is forbidden to work stones without suitable shelters […]” It is almost no surprise that it took 5 and a half centuries to complete the project for the Milan cathedral.

#10 On public transportation between cat and dog, the cat loses

The men and women of ATM are a small pride of the Milanese. They carry citizens from one end of the city to the other with enviable efficiency. And some oddities.
For the animals we have already seen that at rush hour they could not go up. What is curious is that if a cat and dog are together in a car, the owner of the cat must give way and get out.
The birds, on the other hand, can remain, kept in a cage. All these animals paid for the ticket. But a hunter who finds himself getting on ATM vehicles can also do so with the rifle, unloaded and placed in the case, without being required to pay the ticket for hand luggage. The new tariff introduced in 2019 has at least rectified this distortion.

Does the modern metropolis appear to us more like a provincial village now? Don’t make a big deal out of it, though. Almost all the Italian municipalities have as their basis this regulation of 1920 and a single text of public safety of 1931, much more… modern. We are in excellent company: we find these refinements throughout the Pangea now divided into continents. Because the whole world is a country.