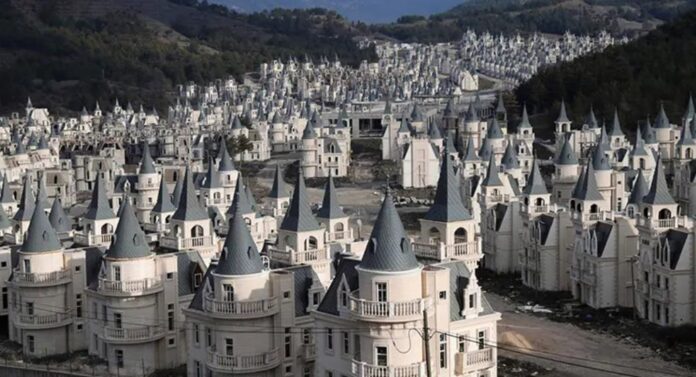 An entire village was intended for demanding billionaires and made up, according to the project, of 732 villas whose features recall the castles of Bavaria and the French ones of the Loire. Buyers had of course the possibility to customize the interiors. This is the story of how this partially built village in the northwestern part of Turkey should have looked like.

In practice, it became the biggest real estate bankruptcy in Turkey over the recent years: the final outcomes were the bankruptcy of the construction company, a completely razed forest and a village with a look that ranges from kitsch to ghostly.

# The DREAM of Burj Al Babas

Burj Al Babas is a dream conceived in 2014 which saw the first stretches born in 2016, thanks to the hard work of 2,500 construction workers. With the real estate units being proposed between 260.00 and 420,000 euros depending on the size and the (more or less) panoramic position, the construction recorded an important stop in 2018 when 350 units were finished and 230 were in progress. Political turmoil in the nation, economical crisis and, probably the first serious doubts of the buyers were the causes of a stop in works which soon later became definitive. No new acquisitions were made and many of the future owners, disheartened by the various problems that arose, asked for their money back.

# All talk and no walk

The initially planned investment was of more than 200 million euros, for a turnover that  should have brought a lot a lot of money, both from the selling of the houses and from a high-end shopping center surrounded by a large park with ponds. The location was perfect, between Istanbul and Ankara. So it was a project that, according to the developers, could have appealed to many of the wealthy inhabitants of the Middle East. Sarot Group and their partner, Bulent Yilmaz, had no doubts about the success of the operation. But business did not go according to forecasts and shortly thereafter we saw the bankruptcy of the real estate company that created the site. According to Bloomberg, the biggest failure in Turkey in recent years.

# No one was ever there

In 2019 Sarot group declared bankruptcy. With it ended any further possibility of seeing the city of castles completed. The words of the mayor of Mudurnu, of which the village is part, were not prophetical. He loudly stated that many people would have paid to visit the town. These words still echo through the desolate streets hampered by abandoned building materials. Until now, the only visitors have been a couple of musical groups who have set their films between the houses, plus some curious people wanting to take photos in this abandoned town that tells the story of a broken dream.