Home Projects Buildings This is the STRANGEST HOUSE in the WORLD 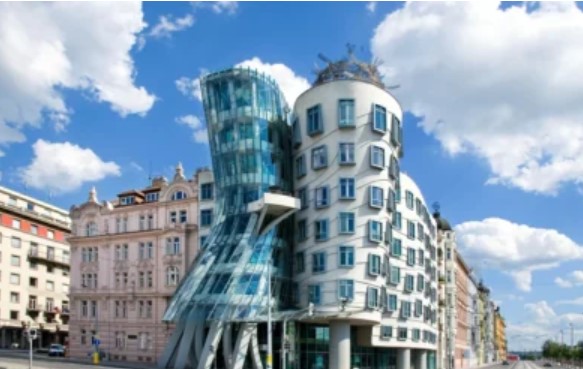 There are many bizarre and sparkling architectural works that artists have given us in recent decades, but the one that has fascinated the most since its birth and that still amazes tourists from all over the world is the Dancing House in Prague. Let’s find out its history and its uniqueness together.

# Inaugurated in 1996, it symbolized a new beginning for the Czech Republic

The Dancing House was born from an idea of ​​the Czech-Croatian architect Vlado Milunic in collaboration with his Canadian colleague Frank Gehry and was inaugurated in 1996. The building was built on the rubble of some buildings that fell during the Second World War and left a space along the Vltava river to be redeveloped. Its extravagance has been a subject of debate for many years as it compared tradition and innovation.

# Two cylindrical towers totally different from each other: one is glazed with a sinuous shape, the other is made of cement with irregular windows

Located a few meters from the Korlovo Namesti metro station, the building has 2 very different cylindrical structures: a glass tower with a sinuous shape that tapers in the center and another built in cement with irregular windows that run along it length.

The artists compared the dynamism of innovation and the static nature of tradition in an almost romantic picture of these two towers that come close but not too close. To represent even more the immobility to be overcome is a metal structure on top of the concrete tower, which seems to represent a jellyfish.

# The Dancing House represents a dance scene between two lovers, his nickname is Fred and Ginger

The shape of the Dancing House represents a dance scene between two lovers. The glazed building depicts a woman being taken by the hips by her partner in a romantic dance on the riverside. The citizens of Prague have noticed this detail and have nicknamed the building Fred and Ginger, just like the two tap dancers.

# Anything but a house: restaurant, art gallery, hotel

Although the name refers to a residential use, the Dancing House is anything but a simple house. Inside we find the Ginger & Fred restaurant, the art gallery, yes because this building hosts works of art with the utmost creativity, and a hotel that with its 21 rooms with a unique design and a splendid view is the perfect destination for a romantic weekend.