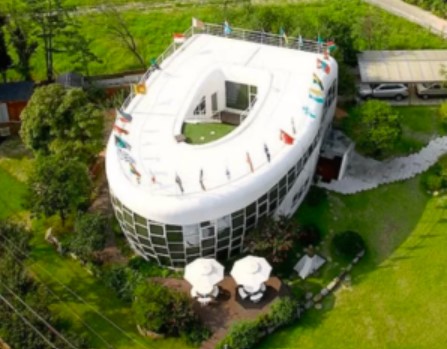 For the series strange houses and where to find them, today we want to talk about the house shaped like a toilet bowl in Suwon, South Korea. It almost looks like a joke or a whim of some extravagant rich man, but behind the absurd shape of this building there is an interesting and serious story instead. What will it be?

# Mr. Toilet and the house shaped as a toilet bowl: an entire life dedicated to the culture of hygienic services

The Toilet House is a building shaped like a toilet bowl. it was built in 2007 at the behest of Sim Jae-Duck who was the former mayor of Suwon and the president of the World Toilet Association. The owner was friendly renamed Mr. Toilet and his history is fascinating.

It is said that this passion for the toilet was written in his destiny. He was born in his house’s bathroom because his grandma used to say that “babies born in the bathroom have a long and healthy life”.

Sim Jae-Duck was mayor of Suwon from 1995 to 2002. During his mandatory he worked hard for the promotion of sanitary measures in the entire country by demonstrating their importance for the population’s health. In order to spread his message, he funded the World Toilet Association whose aim is to promote the culture of sanitary all over the world. In 2007 to celebrate the creation of this organization, Sim Jae-Duck had his house turned down to rebuild it with the shape of a toilet bowl.

# The museum of sanitary’s history

Jae-Duck’s life wasn’t so long as his grandmother had hoped and he died at the age of seventy in 2009. But his battle wasn’t wasted. His family donated the bizarre house to the city that transformed it in a museum, obviously dedicated to toilets.

The building develops on two floors and is still visitable today. One floor is dedicated to the history of worldwide sanitary and the other one to the Mr. Toilet’s life. The restroom of the building is also a tourist attraction: it’s a room with enormous transparent glass panels that became dark when someone walk in to guarantee the necessary privacy.

# Restroom Cultural Park: the theme park dedicated to the toilet

But the oddities are not over. Around the house there is a true theme park dedicated to the toilet: the Restroom Cultural Park. A huge collection of statues creates a truly unusual and exhilarating park. The statues represented a very wide range of situations, elements and characters that are linked to the restroom world. You can find a lot of statues that represent human excrement in the typical spiral shape, a number of reconstructions of period toilets and many more.

There are also reproductions of famous works of art, such as Duchamp’s Fountain or Rodin’s The Thinker, which in this case thinks on a ceramic bowl.