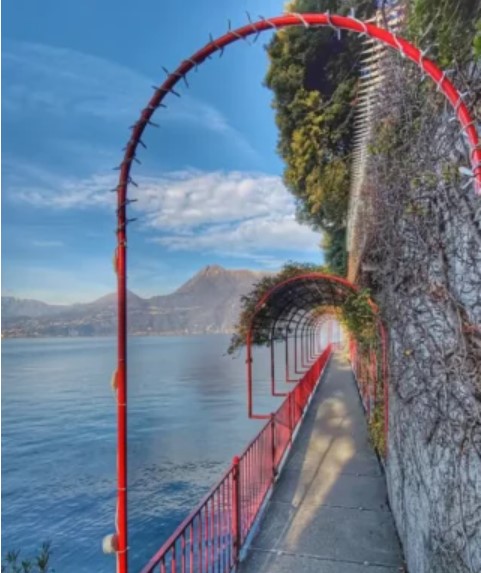 Incredible views that you can enjoy only if you first make a little effort, here are the 6 most beautiful scenic paths in Lombardy. Easily reachable from Milan.

# 1 The Sun pathway on Garda Lake

The Sun pathway is one of the easiest but also the most fascinating trekking routes that you can do in Lombardy. Starting from Limone sul Garda, reachable from Milan in about 2 and a half hours, you can take a path that crosses a pine forest and climbs slightly across the mountain aside.

Very Important are the historical evidences that you can see along the route: a trench, air-raid shelters and a military post. But the strength of the Sun pathway is the view you can enjoy walking along for almost all the way: a spectacular scenery on Garda Lake and the Limone village.

For about 10 km the path, mainly flat, leads from Colonno to Cedenabbia and crosses some characteristic villages. The Greenway of Como Lake can be divided into seven small stages, usually covered all in less than 3 hours, but sometimes you can choose to cover only one of few portions.

While walking on the Greenway you will encounter ancient villages, villas, gardens, romantic and baroque churches as well as a natural landscape and an unique view of Como Lake.

If you take it easy, by walking along the Greenway, you could also make a small detour that leads you to Isola Comacina, one of the most interesting archaeological areas of Lombardy, as well as an island with lush vegetation

With the Trenches Path the difficulty increases. This is also a path that can be walked by everyone, but the level begins to be intermediate. In addition to a spectacular view, the Trenches Path gives, to those who follow it, a piece of history. Along the walk there are fortifications and trenches adorned by views of Como Lake and Lugano Lake. To walk along the path you have to go almost to the border with Switzerland, about an hour and a half from Milan. The route takes place in Val d’Intelvi, in the Forest of Monte Generoso, and to do so it is advisable to start from the Customs of Valmara in Lanzo (840 meters above sea level).

We are still on the lake but this time the Iseo Lake. The “Antica Strada Valeriana”, as its name says, is a road of remote origins which have been for thousands of years a mandatory passage to go to the Valle Camonica. It became unusable and was then recovered and returned to tourist use.

The “Antica Strada Valeriana” starts from Pilzone d’Iseo and arrives in Pisogne and is always adorned by a view of Iseo Lake and by the surrounding mountains. Along the way there are many churches, shrines, hermitages and chapels, so many that it has been classified as a “path of devotion”. But the road is rich of history too: along the walk for example there are the Pyramids of Erosion, a proof of the passage of the glacier during the Wurmian glaciation.

# 5 The Love Walk in Varenna

The walk of lovers is one of the best known in Lombardy as well as one of the most beautiful. It starts from Varenna and is actually a very short route: it begins at the landing-stage of the village and reaches the center of it. It is a simple walkway overhanging the sea of about few hundred meters but offering a unique view of the village and the lake.

# 6 The Viandante’s Path, the longest

The Viandante’s path is the longest path: to do it all you have to walk for 45km. It is in fact one of the short paths of Lombardy that runs around Como Lake, usually divided into 3 or 4 stages and starts from Lecco and arrives in Colico, although there are some variations.

The Viandante’s Path is a walk covered by our ancestors in their daily lives, a road traveled by those who built the villages on the lake. The view? The Lecco lakesides of the, well known, “branch of Como Lake that faces south”.