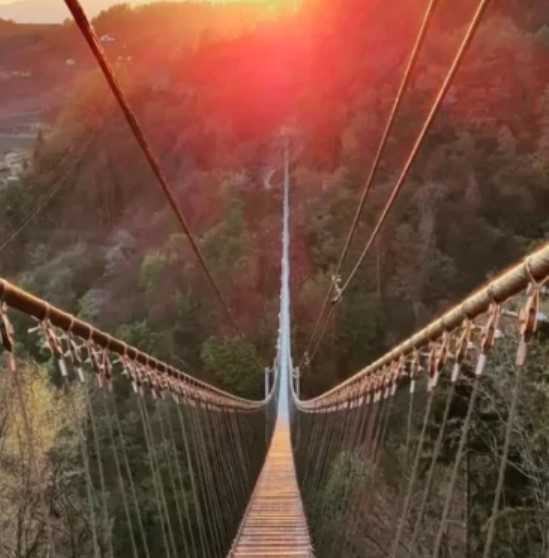 Only for fearless hearts will the longest Tibetan bridge of this type in the world be passable. It was inaugurated in May 2022. But controversies arose immediately: it is not true that it is the longest. But let’s proceed in order.

# Inauguration of the bridge of records: walking in the void for half a kilometer

May 14, 2022. A grandiose engineering work has opened to the public: the longest Tibetan bridge with discontinuous tread and without lateral tie rods in the world. Those who are not faint of heart are allowed to travel over half a kilometer of the bridge suspended in the air with a maximum height of 121 meters.

For safety, it is mandatory to wear a special harness and to secure one of the 7 cables that make up the supporting structure of the Tibetan bridge. One of the two heads of the structure is in the center of Dossena, in Val Brembana, while the other is located in the so-called Roccolo della Corna Bianca. On the way you pass over the old gypsum quarry while you can admire the peaks of the Prealps and the Grigne group, with the Grigna peak that dominates with its 2410 meters.

# An operation that involves institutions and citizens

With a contribution from the Lombardy Region and the Cassa Depositi e Prestiti, the work aims to become an attractive point and a great tool for relaunching an area that is paying heavily for the pandemic period. The need to relaunch tourism, which is also one of the predominant voices in Val Brembana, has convinced investors and workers to complete the bridge as soon as possible. Following there will be numerous interventions aimed at modernizing the numerous accommodation facilities in the area.

This one in Dossena is a great challenge but there is a lot of optimism on the part of those working in the sector and of the institutions who strongly believe in this ambitious project which, as a further point in favor, will serve to avoid a depopulation of these areas by trying to repopulate them considering also a quality of life that is increasingly suited to a population that is slowly shifting its priorities towards an ever greater attention to slower rhythms, quality of the environment and a circular economy that is always very present in these valleys.

# But from Basilicata they raise their voices: the longest bridge in the world is ours!

Just inaugurated and the protests are already arriving. The longest Tibetan bridge in the world is ours! This they say from Basilicata. In fact, the Tibetan bridge of Castelsaraceno measures 586 meters, while that of Dossena stops at 505. But from Val Brembana they were quick to point out that the Dossena bridge is the longest in the world among those “with discontinuous tread and without lateral tie rods”. And then it is a higher bridge: 121 meters of average height against the 80 of the competitor from Basilicata. The only way to experience where the greatest emotion is experienced is only one: to walk them both.