Home Cities The Analemma Tower: the OVERTURNED SKYSCRAPER, suspended in the sky, traveling in... 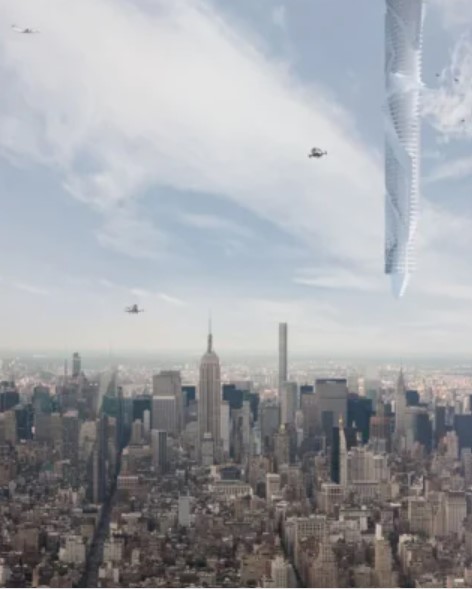 A project bordering on the impossible, so ambitious that you can’t believe it. Clouds Architecture Office has designed a very high skyscraper, the height of which even rises from the earth’s atmosphere. To increase the extraordinary nature of the project, the skyscraper will be positioned upside down, suspended in the air without any base, or at least, without any base attached to the ground. Here’s what it is.

The Analemma Tower: the OVERTURNED SKYSCRAPER, suspended in the sky, traveling in the Earth’s orbit

# A traveling skyscraper in Earth’s orbit, hanging from an asteroid

It is called Analemma Tower and is the project of Clouds Architecture Office (Clouds AO), a studio that exploits research and planning related to design to be able to carry out projects of the highest degree. The idea for Analemma Tower came specifically to Ostap Rudakevych, Masayuki Sono and Kevin Huang, three designers who after many studies have understood that building an upside down skyscraper attached to an asteroid in Earth’s orbit can be done.

Yes, the skyscraper designed by Clouds AO should be positioned on a small asteroid in orbit above the Earth, or rather, as the designers explain, “it is possible to drop a high-strength cable towards the earth’s surface from which to suspend a very high tower”.

The skyscraper would then be attached to these cables and from the ground it would simply be seen suspended in the air. The fact that it can be attached to an asteroid means that the Analemma Tower can be built anywhere and then positioned where it is best believed. The skyscraper would be placed in an orbit that would allow it to travel between the northern and southern hemisphere on a daily cycle.

# Life as an astronaut at 32km of altitude

If Analemma Tower were to see the light for its construction, it means that we have arrived at projects so ambitious that the mind of man can no longer be stopped. Clouds AO believes that buildings can develop to an infinite height, there is almost no limit to their construction: placing them in the sky means having unlimited space.

The tower would be completely self-sufficient: thanks to a coating in solar panels it will draw energy and the water system will be a closed circuit that will recycle rainwater. If at the design level there is no limit to the height of the skyscrapers, the 32km of height that were designed for Analemma Tower could encounter some problems: “while on the one hand it can be useful to have 45 minutes of extra light at 32,000 meters height, on the other the perception of emptiness and a temperature that reaches 40 ° C below zero would prevent people from going out without a protective suit ”say the designers. It means having to live like astronauts.