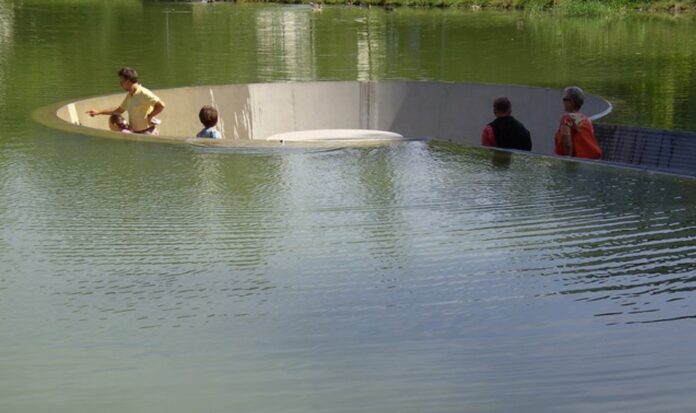 Design objects, some genuine pieces of public art: are these the world’s most innovative benches?

Any modern city could make a big splash by choosing to host, in its streets, some expressions of urban art.
The role of the bench, reinterpreted by designers, can thus evolve in any form. Let’s look at some examples of benches as art forms.

Inspired by cobblestones smoothed by river waters, the benches installed by Gensler in San Francisco’s South Market building are part of an almost unique project.
The entire building has been completely renovated to carve out multifunctional spaces. The benches are housed in an open-air environment that is both co working and a space for connecting with colleagues.

Also part of the outdoor furniture is a seating structure, inspired by the “QWERTY” keyboard of an old typewriter. It could be a tribute to Olivetti’s iconic Lettera 22.

Literally a piece of urban art, Newcastle’s bench is a strip of asphalt that lifts off the ground to host citizens seat.
It is as if the city is being peeled back to reach the pulp and juice.

A work that hides the mystery of its creators, it allows a surreal journey through the water of Vöcklabruck’s lake, in Austria.
The bench is actually a platform that disappears below the surface of the water, immersing visitors in contact with nature.

#4 The crank bench against the rain by Sung Woo Park

The idea is useful and appealing: the bench designed by Sung Woo Park is covered with a rotating surface, which can be operated by a side crank.

When it has finished raining, the crank is operated to make the dry part of the bench lifts, which immediately becomes ready to use.

A seemingly simple bench, concealing an insight by Zoltan Bencze and Szovetseg’39, installed in Pecs, Hungary.
The seat is a simple cast of polished concrete, with glass inserts that actually come to life with the darkness of the evening, lighting up with LEDs.

#6 The bench carved out of the buildings in AllesWirdGu, Luxembourg

It is actually a long-covered bench and is located in Steelyard Square in Luxembourg City.
However, it could be carved out of any modern building, making it one of the most coveted shaded places in the city.

Pablo Reinoso is an Argentine-French artist who has been designing benches since he was 15 years old.
Some of his creations are inspired by spaghetti forks. He has designed ones in wood and painted steel, any would look great in almost any town.

Musical notes and as a seat the keyboard of a piano, here are benches suitable for the city that have, for example, music schools and conservatories. Such benches can be found in Poland and Hungary.

A true object of outdoor furniture, Cho Neulhae and Jaebeom Jeong brought the swing game into their “Swinger” project. It consists of two interconnected seats with opposite backs and a large central “U” that allows the structure to pivot with the weight of the guests. When there are two, fun is guaranteed.

Now a classic of their kind, book-shaped benches have evolved more and more to become concrete sculptures, such as this one that can be found in Paris, in the square named for Gabriel Pierné

Continue reading: THE TREE-PALACES: an URBAN FOREST that goes beyond the imagination