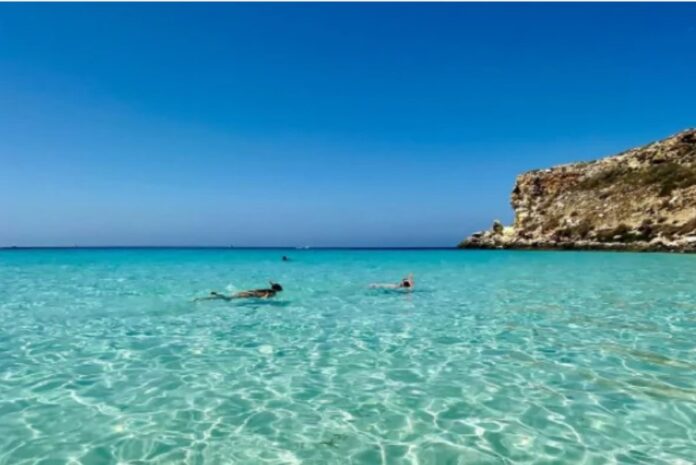 A paradisiacal beach, defined by Domenico Modugno, who had a villa right on this beach, “the pool of God”. Appreciated by the whole world and envied by many, this Italian beach was found to be “the most beautiful in Europe” according to the reviews on Tripadvisor, as reported by the site siviaggia.it.

The “most BEAUTIFUL BEACH in Europe” is located in Italy

#The beautiful sea beach in Lampedusa

We are talking about Lampedusa’s Rabbit Beach, connected to the island only by a sandy isthmus. A fascinating beach, with a wonderful, almost transparent sea, a magnificent and sometimes uncontaminated place. Isola dei Conigli, as it is commonly called, is located in a nature reserve and is not always accessible to visitors. To safeguard the nesting of sea turtles, in fact, you can only go to the beach at certain times of the day.

On the Isola dei Conigli, the pool-colored water and the transparent seabed allow you to explore the marine fauna of the island of Lampedusa and, at times, you can even see dolphins. If, then, the sea is accompanied by a very fine white beach and an intense blue sky, it can be said that the Spiaggia dei Conigli di Lampedusa is a true paradise on earth.

#The numbers speak for themselves: Isola dei Conigli is the most beautiful in Europe according to Tripadvisor reviews #The other Italian beaches in the ranking: Sansone, Tropea and La Cinta

That of Lampedusa, however, is not the only Italian beach to be included in the ranking: going down a few positions there is the beach of Sansone on the Island of Elba, in 20th place, the beach of Tropea in Calabria in 23rd place. and the Cinta di San Teodoro, in Sardinia, at the 25th.

#An Italian excellence: in 2014 it was the most beautiful beach in the world