Home Regions Asia A monumental project: the 1 million people PYRAMID. Would you live there? 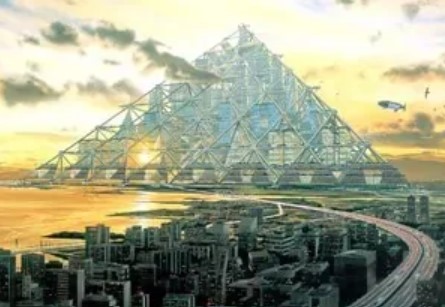 A very impressive idea could come alive in the next years: a gigantic transparent pyramid born to satisfy housing needs. Let’s see where could be built.

A monumental project: the 1 million people PYRAMID. Would you live there?

At the moment, we only now what will be its name. This amazing construction could be built over the Japan Sea just in front of the capital city.
Behind its birth we find Dante Bini and David Dimitric, two architects of Shimizu Group. The Pyramid will reach an height of more than 6500 feet and will contain within it twenty skyscrapers made each one of thirty floors at least. In all the building area could live up to a million residents. The pyramid project was mainly born to give an answer to the difficulties in finding a space for housing, a longstanding problem in Japan.

This amazing Pyramid will have a strong structure able to resist earthquakes and tsunami, which can be more frequent in Eastern Asia than Europe. It will be 12 times bigger than the very famous Giza Piramid, with a surface of almost 34 square miles and will also be made of 204 pyramidal units embedded with the entire building.
In addition, there will contain a lot of shops, malls, offices and also an underground transport system. That’s why will be necessary to use not only conventional building materials like in e.g. steel and concrete, because these could result too heavy to support the pyramidal area. For the stability of this massive construction, building team will be provided with carbon nanotubes, which could lead to a very lighter outcome in terms of weight but, in the meantime, much more resistant.

And as expected this is something very expensive: the estimated cost is close to 558 billions of euros. Plus, if the project were definitively approved, the time needed from the moment the first stone would be placed to the completion of the project could be very much. In fact, every member of the board actively participating in Tokyo’s Pyramid considers 2030 as starting date and even 2100 for the end.
A scenario not so different from the one admired in the futuristic masterpiece movie directed by Ridley Scott, Blade runner, where the main characters are involved in the building of the Tyrell Corporation. But coming back to real life, we ask ourselves (and we ask YOU)… Would you live in it?