Home Cities A very short On The Road: from NEW YORK to WASHINGTON DC

Now that we can freely travel to many of the world’s destinations, one of the first places that we want to re-embrace is certainly the United States of America. To give a new flavor to yet another visit to NYC, which always remains the most popular destination, we can think of a very short on-the-road trip. Without exhausting stages but still capable to give us a bit of freedom in travelling again over the highways of the States up to Washington DC. So let’s see 7 interesting places to stop on this small American journey.

A very short On The Road: from NEW YORK to WASHINGTON DC

#1 Newark and the New Jersey 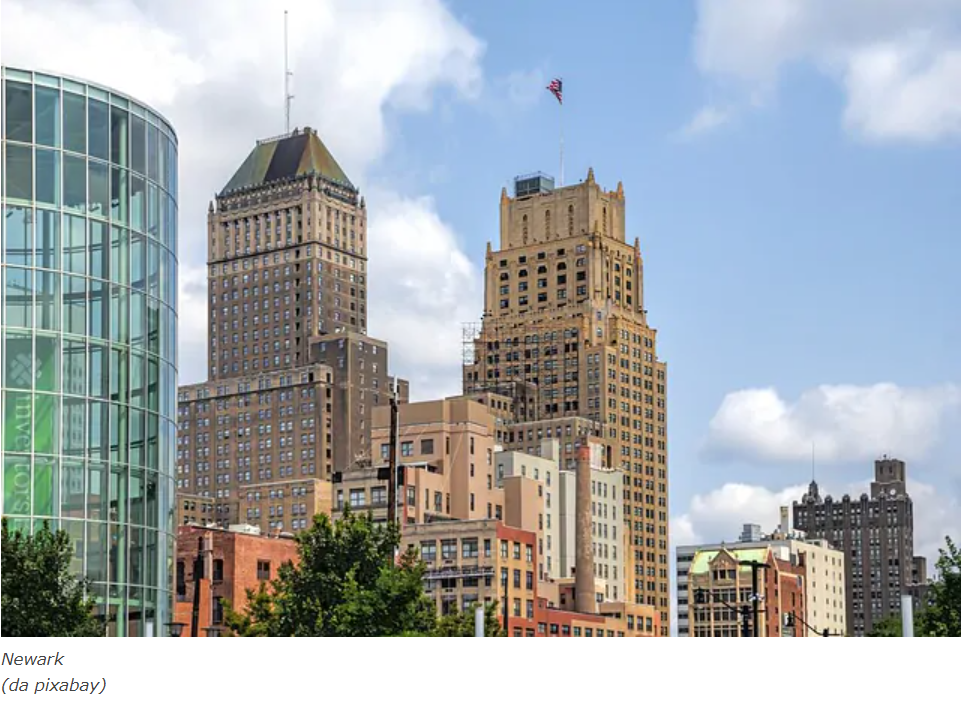 We take a classic yellow cab in the early morning to Newark Airport, the second busiest airport in the New York metropolitan area, where a rental car will be waiting for us. Crossing the Hudson River, we will immediately enter the other America, as NYC still remains a world apart from the rest of the country. Before reaching Newark, we ask with a short detour to have a stop in Hoboken, to devour a creation of the Boss of the Pies, the famous reality TV, admiring the wonderful view over Manhattan.

Newark has often been wrongly considered only an outpost of the Big Apple, but here life flows normally. This is evidenced by the TV series of the Sopranos or the novels of the great writer Philip Roth, set here. In this city of three hundred thousand inhabitants we will be able to admire the curious Villa Krueger, built in 1888, which looks a bit like the classic horror house of amusement parks. One of the attractions that the United States offers are the great professional leagues of various sports, including basketball (NBA), American football (NFL) and baseball (MLB). If there is a New Jersey Devils match, be sure to see the ice hockey (NHL) show live, even if it’s cold and tickets aren’t cheap. 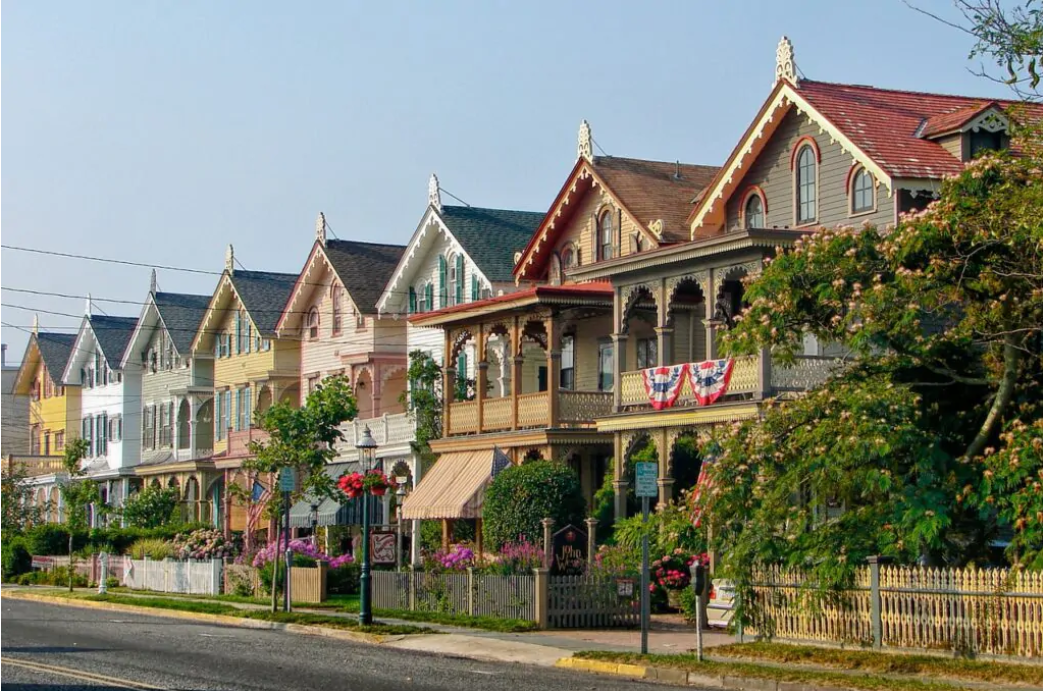 Many of the capitals of the 50 federated states are curiously small provincial towns. It is certainly worth visiting them to understand these realities that make up an important part of the stars and stripes society. To reach Trenton, we linger for a long time in back roads, feeling part of daily life in New Jersey, among the malls, the operating factories, the cemeteries and the wooden bridges. Let’s stop for breakfast with a Pork roll, born right here.

But let us not be confused by the messy urbanism, which essentially means that the city was founded long ago (by US standards): in 1679. Its importance as an industrial center in the field of steel and rubber has long since passed, but it remains to perpetrate the slogan Trenton Makes, The World Takes chosen as the symbol of the city administration. So let’s go and see the Capitol (Capitol), the seat of the government of New Jersey, built in 1792. Its golden dome dominates Veteran’s Park with a greater grandeur than the one transmitted by the narrow streets of this pleasant town. 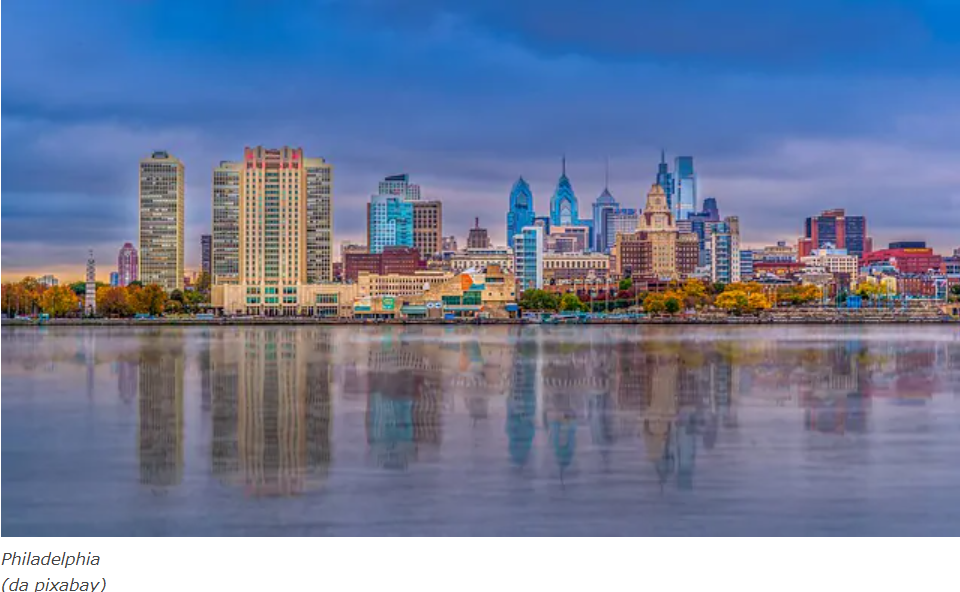 We reach the sixth largest city by population in the United States, entering the state of Pennsylvania. An experience you immediately realize when driving is that endless suburbs seem to never end. North American cities make themselves desired for a long time. Here, passing the Delaware River, we are dazzled by the skyline. The blue glass of the 1987 One and Two Liberty Place skyscrapers dominates the scene. Here Cigna, the largest insurance company in the country, is based. We park in a multi-storey and go to explore the city, which has many attractions. You could also try and spot the slightly dusty locations of the incomparable Rocky saga with Sylvester Stallone.

The aura is the one of an old capital already from the central Penn Square. There the bleached bulk of the neo-Gothic City Hall, the perspectives of Franklin Avenue in Champs Elysèes style and the mighty piers of the old skyscrapers of the early twentieth century stand out. But we quickly cross Downtown to go and discover the oldest and most preserved blocks of Old City. Towards the river, among the brick buildings, the taverns and the haunts for sailors, stands the home of Benjamin Franklin. Here the slogan ‘once upon a nation’ is particularly successful. In Washington Square, the Georgian Independence Hall together with other historic buildings makes up the Independence National Historic Park. This is to commemorate the places where Mason, Madison and George Washington prepared the July 4, 1776 declaration of independence.

# 4 Harrisburg and the Pennsylvania Hills 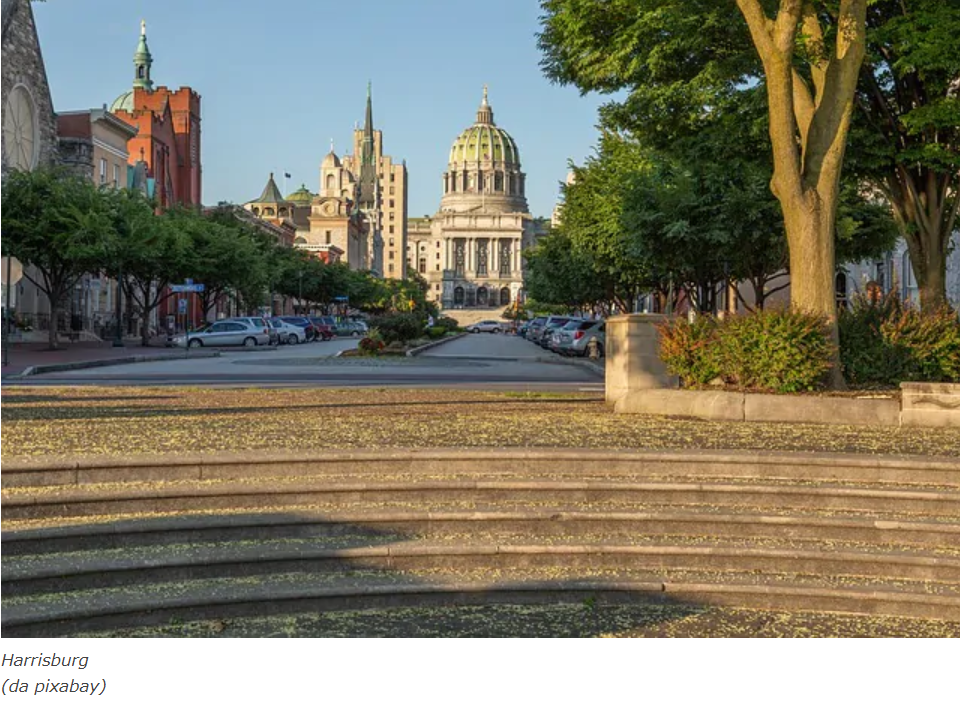 We take a detour from our route and go exploring the inland hills of Pennsylvania. The outgoing traffic will certainly not as the incoming one, even if speed limits are reduced. It is advisable to respect them literally, given the numerous patrols of state police at the edge of the roadways. This state still bears the name of William Penn, founder of the old British colony. He had an incredible vision by imagining the European Parliament, which Russia could also have joined. While we stop at the rest area to eat a Scrapple (pork mixed with cornmeal, put in a bowl and fried), let’s get ready to visit the second small state capital of our tour.

Harrisburg appears in the romantic scenery of the Susquehanna River, between islands and bridges. The pristine shore of Lemoyne is left exquisitely weed, while the shore of Downtown Harrisburg reserves a splendid string of classic villas. The town, twinned with Hiroshima in Japan, retains a discreet petty-bourgeois charm. The tallest building is the classic business hotel and the size of the General Hospital is small. Life flows in the bars that broadcast all the leagues on the various screens professional. Here, too, the main attraction is the Capitol, one of the most beautiful in the nation. Its dome exceeds 80 meters in height and from a distance it might even remember … er Cupolone.

# 5 Pittsburgh, the city of bridges 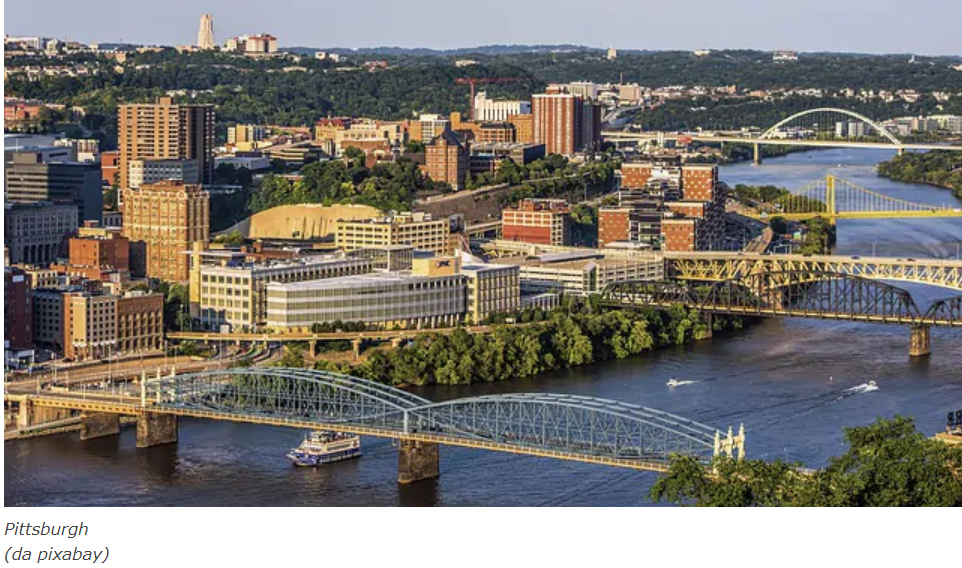 We continue west, passing from the north. We cross the hills of Pennsylvania Vineyards, the greatest revelation among the wine-growing areas of the States. Approaching Pittsburgh, we see the city is developed around the Point. That’s the place where the Allegheny and Monongahela rivers converge to form the Ohio River. We immediately notice how this wonderful natural location allows the city to develop charming residential hilly suburbs. Pittsburgh is nicknamed ‘the city of bridges’ for the high number of structures that cross the rivers. This includes the iconic Three Sisters from the 1920s.

The heart of the city is the triangle of the Central Business District. Here you can find Neo-Gothic churches, the splendid mirror structures of PPG Place. And again the perspectives of low houses preserved on Liberty Avenue or the vitality of the restaurants with the colorful outdoor chairs in Market Square. But the main attraction, linked to those born in Pittsburgh in 1928, is undoubtedly the Andy Warhol Museum. This is the largest museum in the United States dedicated to a single artist. It offers a complete overview of his artistic career. And if the genius who theorized that art was made available to everyone is still not Pop enough for you, then wander the city looking for the filming locations of another popular culture icon, the 1983 film Flashdance. 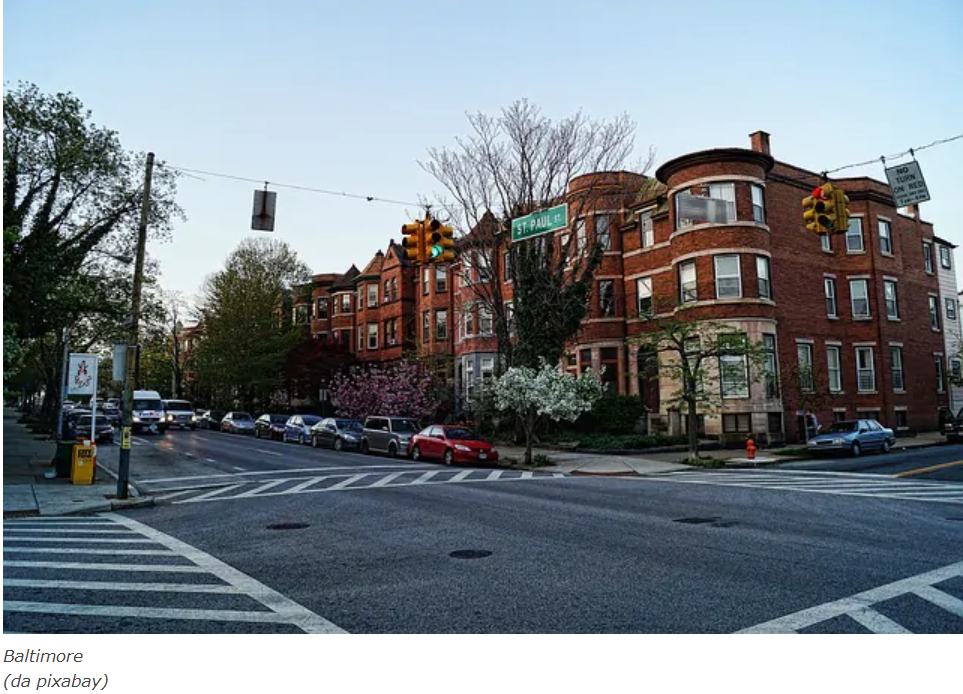 Okay, we deviated from our itinerary, but it was definitely worth it. Now we turn south again to reach the last of the three federated states of our American trip: Maryland. The flag of the small state that was part of the original 13 is particularly different: it has heraldry. Almost an European aftertaste, to anticipate the surprises that this land will reserve for us. Let’s start from entering into its most representative city, Baltimore. This is the most important port of all of the United States.

The agglomeration is nicknamed Charm city, and the reason for this can be easily understood. Just cross the many charming residential neighborhoods east and west of Downtown. Those to the north, poorer and more dilapidated, remind us that Baltimore remains one of the most dangerous cities of the USA, although the situation has recently improved.

What do we stop to visit in this city that makes us dizzy? Surely the trendy urban area of ​​Mount Vernon which is the cultural and historical center of the city. It has institutions such as the Walters Art Museum, the sought after Peabody Library and the ancient Washington Monument. Mount Vernon Place is surrounded by greenery among the almost Scottish suggestions, related to nineteenth-century architecture. Then the directly port districts: Inner Harbor frequented for hotels and shops, intimate brick Fells Point with its private marina. Little Italy where the Italian American community was based, Canton with its elegant community restaurants with well-tended flower beds.

# 7 Annapolis and the heron coast 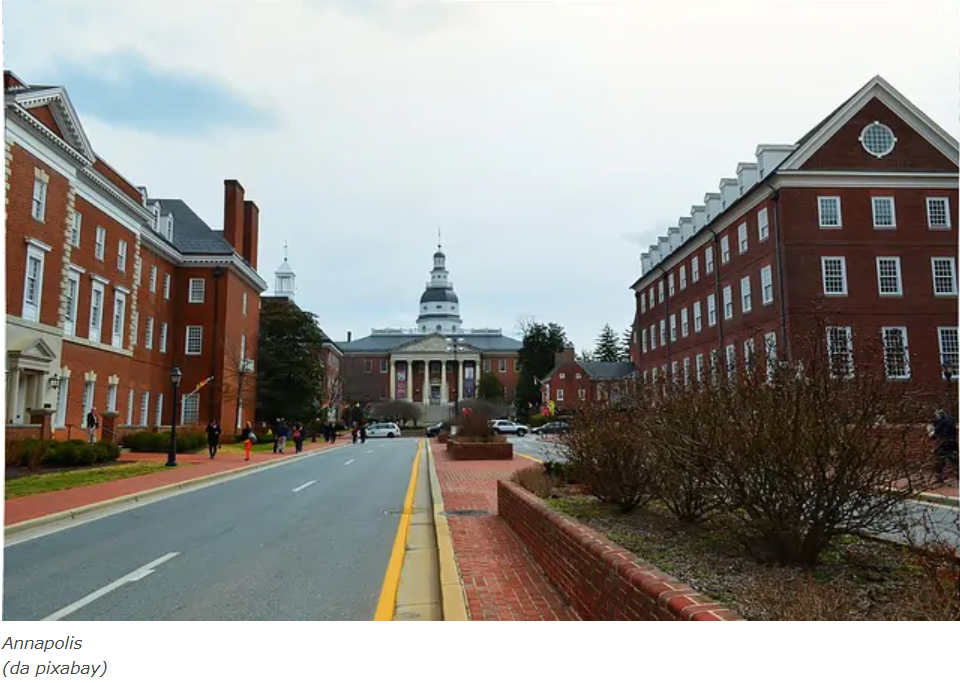 Americans, as we know, are very fond of slogans. Optionally, it is also possible to have them appear on car license plates. No matter they always change from state to state, also as background and font colors. Maryland has as its claim ‘Protect the Chesapeake’. It refers to the fabulous bay where bird watching of herons is a common practice. In fact it’s a jagged coastline with islets, bridges and lakes, extremely suggestive, which you cross in the short journey from Baltimore to Annapolis. The small state capital was for a short time (just like Baltimore, Philadelphia and Trenton) the capital of all of the United States.

The great Naval Academy of Annapolis (United States Naval Academy) was founded in 1845 and is the first, immediate distinctive feature of this pleasant town. Annapolis also boasts a completely preserved historic center, where at night the marines invade the streets of the town like a single large, white coat. Fifty thousand inhabitants, nicknamed the Sailing Capital of the World, Annapolis obviously hosts the Capitol of Maryland. This is even the oldest state legislative building still in use, completed in 1772. Built in Georgian style, it has a sober turret dome. Now let’s go and eat a Crab cake. What’s that? Croquettes made with bread, eggs and crab meat.

Tomorrow morning, mixing with the commuters, we will finally enter the territory of the District of Columbia, to explore Washington …