Home Regions America The BEACH where you can swim with PIGS

There are many unusual animals you can swim with: sharks, dolphins, stingrays, turtles and even seals. This list is not complete, we have to add an animal whose name I never thought I’d see on this list: pigs.

In fact, between the white sand and crystal clear water of the Bahamas, there is an island inhabited by many pigs that you can swim with.

We are in the Bahamas, in the Exuma archipelago, also often called the paradise on earth.

Exuma is made up of 365 islands, unspoiled places, with white sand and crystal clear water that attract many tourists every year because it is the perfect place for a relaxing holiday.

Among these 365 islands there is one with very special inhabitants.

#The Pig Beach: the island of shipwrecked pigs

Pig Beach, officially Big Major Cay, is an uninhabited island located in Exuma that owes its nickname to a colony of pigs that populate it.

There are many legends that try to find an explanation for the presence of pigs in this remote place.

There are those who say that the pigs were brought to the island by a group of sailors with the intention of eating them but never returned and those who believe that the pigs survived a shipwreck and managed to get to shore.

There are even those who argue that these animals are part of an economic plan that is intended to attract tourists to the Bahamas.

Legends aside, one thing is certain: the pigs of Pig Beach have become real stars.

# Swimming with the pigs

The pig beach is a block where men do not live but you can go on excursions to be able to go and visit it in the day.

You can embark from Royal Plantation Island to reach Big Major Cay, all the way to Pig Beach.

The Pig Beach has now become famous and there are many tourists who decide to go and find all these pink mammals that are now depopulated on Instagram.

According to the lucky ones who have tried this experience, the welcome is very warm: the pigs run towards the tourists to get some fruit and stay with them in the water, but not too long since their bodies are not made to swim and prefer to lie down in the sun.

# The other side of the coin

Pig Beach is certainly an unusual place to behold in life but not all that glitters is gold.

In 2016, the actress Michelle Chen visited the island of pigs on the occasion of her honeymoon and told the dark side of the coin that is very often overlooked.

Michelle said that the island is mainly populated by pigs that appear to be in poor condition, due to too much exposure to the sun or for tourists who give them anything to eat.

Added to this is a very important question: since the island is uninhabited, shouldn’t there be thousands of pigs? For obvious reasons, the pigs that welcome tourists are never more than thirty, but what happens to the others?

The actress’s testimonies caused a sensation and should have forced the government to place more controls, especially for the safety of such welcoming animals.

# How much does it cost to swim with pigs? 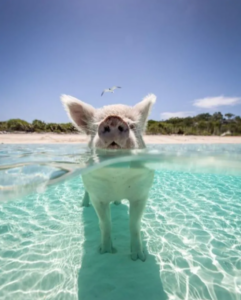 Swimming with the famous pig colony has a price and is also very high, on average you spend $ 215 per person!

A little too much for a “family” business?